Thursday, although only in mid-30s (F), the sun came out brightly and there was no wind, so i braved the temps and went to my farm. I was concerned about the deep cycle 12V battery running my solar energiser getting low on charge. With temps below freezing each night, a battery outside, if flat, can easily be ruint. (my solar panel is currently under renovation)

My last entry described my plan to strip graze south of the timber, so here is an outline. There is a great deal of difference in the amount of forage just south of the timber vs heading on down the hill to the south, so my paddock sizes need to be adjusted to allow for 1 1/2 hours of grazing. Cows really won’t graze longer than that before relaxing and chewing their cud.

In this case, they still have plenty of grazing in the timber, so they were not hungry at all. I will be leaving them for several days here so they will clean up.

How do i make any determination as to how much area to give my cows? Basically, it’s a math problem. The art is training your eye. When i pulled out the polybraid (white lines), i took large steps to estimate the distance, then multiplied that number times 3 feet. In this case, it was right at 300 feet. I step off the bit on ‘y’ axis (purple line), using the second strip for an example because it is straight across to make for simpler explanation. Anyway, it is about 70 feet. So 70 feet times 300 feet equals 21000 square feet. There are 43,560 square feet in an acre, so the area in question is 48%. Obviously, for ease of figuring in my head, i’ll use 1/2 acre. Now, the art part. I estimate in this paddock there to be only 1000 lbs of forage per acre available to total graze, so total is 500 lbs. Using a 70 animal unit figure and knowing they will eat about 30 lbs per day per head. My herd will consume about 2100 lbs total forage per day. If i was on target for giving them 1 1/2 worth of grazing (4 moves per day) or 1/4 of their time grazing, they would need 525 lbs of forage to graze for that time period. Amazingly, or perhaps not so amazingly since i’ve been estimating forage per acres for decades now – you can see that estimates come out extremely close. That’s just pretty cool.

My explanation is probably clear as mud, but it’s not difficult in real practice.

Paddocks will be smaller as i move down the hill since the forage is much heavier – some will be up around 3000 lbs per acre and i will adjust the grazing strip size as needed to accomplish my goals of total grazing.

My cows have learnt to come to the reel end so they will walk behind me as i reel up the polybraid to gain access to their new forage break. This reel, polybraid, and posts will be used to leapfrog ahead to form the next paddock.

I completely forgot to check and repair a water gap along Cotton Road which was in a paddock in which i had a young cow get out last time the mob was in this paddock.  She was the only one to get out, thankfully.  Anyway,  despite having driven the 35 minutes and shifting the cows that morning, i had to go back in the evening to check the gap.  Especially since it is adjacent to a cemetery.  I thought i’d just run up in my pickup since it’s faster, but she was out and had taken a friend with her!  Cotton Road is not passable by pick up, so i had to drive back home and get my Gator and some more tools.

The two escapees had drifted into the cemetery instead of continuing west down Cotton Road which made it MUCH easier and quicker to walk them back into the paddock.  Very thankful they were not yet near the tombstones.  I’ve had to pay for repairs in the past and i sure didn’t want another round of that!

Made it back up there before dark and drove a steel t-post and dropped this heavy section of an old hay feeder.  About a week ago, i had cut down these hedge tree sprouts and they were laying nearby, so i dragged them to lay in there as well just to discourage any lounging.  Hedge trees are covered with tiny thorns.

Next day, i needed to check to be certain my repairs had stopped the escapees and thankfully, they had. 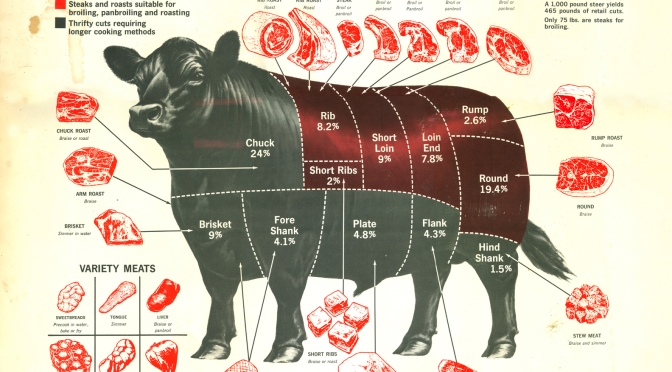 This guy cuts and talks fast, but you can always back it up to listen again.  Now, remember, your local butcher may not be familiar with all these cuts.  Names for various pieces can vary from region to region and country to country as well.  Also, this guy doesn’t mention ground beef.  Some of that stuff he set aside will likely be ground, but also you can choose any or all of the beef to be ground.  That will make expensive ground beef, but it will also be the highest quality ever!  For more information about buying from your neighbor, read my earlier post.

Here are charts from the Beef It’s What’s For Dinner website.  You can even download for printing or magnifying. 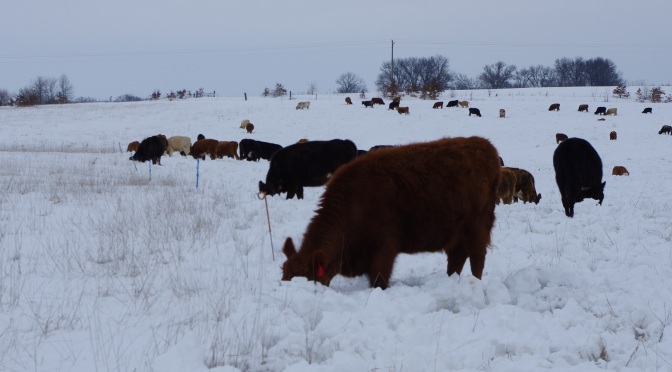 It’s not hard to understand why most young people have no interest in farming as a career.  Low wages, working conditions can be brutal at times (weather related or dangerous), and very low return on investment coupled with high financial risk.  Not a good combination.  The average age of principle operators continues to rise and is now over 58 years old – a time when many in other sectors are planning retirement.  However, the young people who are starting up do seem to work smarter and not harder with the result being a more balanced family/work lifestyle.  Also, mechanisation and better ranching principles continue to make the work more pleasant and give farmers/ranchers the opportunity to expand without working harder or longer hours.  There is hope that agriculture will continue in the US, just with fewer operators and sadly, still supported with off farm income.  There is a joke amongst farmers and ranchers that when asked what they’d do if they won a million dollars, the answer is ‘farm until it’s gone.’

Well, buggers, both my husband and son are sick with the croupy head and coughing junk.  Dallas has had it for nearly 10 days, my husband got hit yesterday, but woke up with it already down in his lungs – he sounds bad.  If he feels bad in the morning, he’s gonna go ahead and make a doctor appointment.

Since we are nearly out of beef in the freezer and completely out of bones, I stole the big bones that were intended for the dog that i had the butcher cut from our own grass finished cow to make broth! (thankfully, i was able to get a cow booked in to the butcher on the 6th of February).

The bones are kind of big, but thankfully, they still fit in the pot.  I pack the bones in the pot and fill to 2 inches to the top of the pot.  Bring to a boil, but watch it or it will boil over and make a mess, then turn it down and let slow boil for 3-4 hours.

With tongs, carefully lift out all the bones.  I then set the entire pot outside to cool so the saturated fat will float to the top and solidify.  Yes, a little fat is good, but these bones will make a lot of fat, it’s really overwhelming in our opinion.  Once solidified, i remove it from the top and put into a tub with lid for later use.

Warm the remaining liquid.  Now, you can just eat it this way for clear broth – maybe add some salt or pepper OR what i did tonight, was to the 1 gallon of broth is one large onion chopped and sauteed in some of the beef fat, 1/2 cup dried parsley, 1/4 cup dried sage, 2 tablespoons celery salt, and about 3 cups of sliced carrots.  Slow boil until carrots are softened to however you like them, maybe 20-30 minutes.  Ready to serve.

Electric poly braid makes it easy forme to muster in me cows and calves for weaning.