Romans 7:12 – So indeed the Torah is holy, and the commandment holy and just and good. (Hebraic Roots Bible)

Romans 7:12 – Therefore the law is holy, and the commandment holy and just and good. (New King James Version)

Scriptures for Life | The Law

Thanks, Steve, for another great teaching!  Shabbat Shalom!

Torah Family – The Curse of the Law

Here is a YouVersion image from good friend, Steve King. How do the Scriptures define ‘saint?’ You may have the testimony of Yeshua, but do you keep the commandments of God?

Malachi 4 says the generation in the days of Elijah will keep the Law of Moses… EVEN the statutes and ordinances!!

Got Torah? Might be a good time to investigate…

Like most who are raised in Christendom, I grew up believing that Jesus came to ‘save His people from their sins.’  And, I was only partly right!  Indeed, personal redemption is necessary for the Messiah’s mission, but it is not the primary focus of His prophesied ministry.

In recent weeks I have had the urge to go back and reread the Gospels with a new lens, that of Yeshua (Jesus) as the 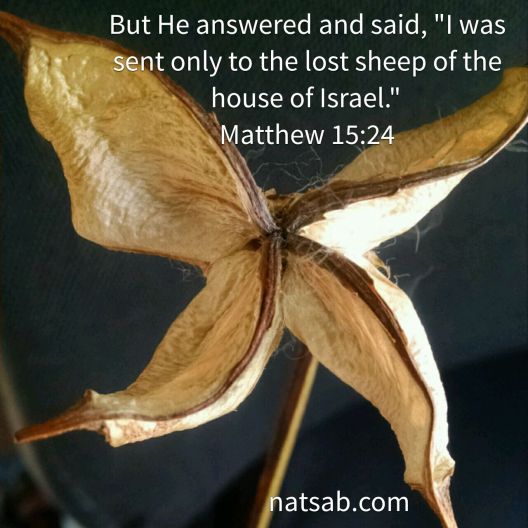 Restorer of the Tent of David.

Acts 1:6 So when they had come together, they were asking Him, saying, “Lord, is it at this time You are restoring the kingdom to Israel?”

Over and over, the prophets foretold of a coming King who will sit on the throne of David and regather Israel, all 13 tribes, from the four corners of the earth.  That King will teach Torah and make Israel into a great and glorious kingdom…

Is the Law of Yahweh bondage? or blessing?

The Mountain of the Lord

4″ It shall come to pass in the latter days
that the mountain of the house of the Lord
shall be established as the highest of the mountains,
and it shall be lifted up above the hills;
and peoples shall flow to it,
2     and many nations shall come, and say:
“Come, let us go up to the mountain of the Lord,
to the house of the God of Jacob,
that he may teach us his ways
and that we may walk in his paths.”
For out of Zion shall go forth the law,[a]
and the word of the Lord from Jerusalem.
3 He shall judge between many peoples,
and shall decide for strong nations far away;
and they shall beat their swords into plowshares,
and their spears into pruning hooks;
nation shall not lift up sword against nation,
neither shall they learn war anymore;
4 but they shall sit every man under his vine and under his fig tree,
and no one shall make them afraid,
for the mouth of the Lord of hosts has spoken.
5 For all the peoples walk
each in the name of its god,
but we will walk in the name of the Lord our God
forever and ever.”

“Do not think that I have come to abolish the Law or the Prophets; I have not come to abolish them but to fulfill them. For truly I tell you, until heaven and earth disappear, not the smallest letter, not the least stroke of a pen, will by any means disappear from the Law until everything is accomplished. Therefore anyone who sets aside one of the least of these commands and teaches others accordingly will be called least in the kingdom of heaven, but whoever practices and teaches these commands will be called great in the kingdom of heaven. For I tell you that unless your righteousness surpasses that of the Pharisees and the teachers of the law, you will certainly not enter the kingdom of heaven.”

I knew I would be disappointed with allowing my row crop agreement to not allow grazing. It appears that in just four years of continuous ‘rest,’ I may have literally snuffed out half the forage base. Livestock grazing is a critical component for healthy landscape environment. Looking forward to non selective #totalgrazing as taught by #realwealthranching to save the day.